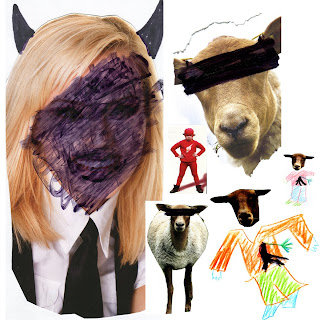 Tough streetkid SERENGETI who was born in the southside of Chicago, founded a label and a project with POLYPHONIC and will be soon releasing an album on the alternative Hip Hop label ANTICON. He has already appeared as a guest on releases of BUCK 65, THEMSELVES and HOWELLS WHERTHMAN.

Multi instrumentalist SICKER MAN lives in Berlin and works as a composer for television and theatre plays (e.g SCHAUSPIELHAUS HAMBURG, DEUTSCHES THEATER). Apart from being a member in several projects such as BLAINBIETER, VINCENT (blankrecords), MINI POPS JUNIOR, he also founded the ambient folk-label BLANKRECORDS in 2005.

Although the line up may apear controversial it all melts into a hybrid of electrobeats, soundscapes and hiphop-shouts.
Gasoline for the stuck-in-between.
SAUL WILLIAMS is meeting M.I.A. on the MODESELEKTOR-stage.

This LP is completed with 4 excellent SHTAAD-remixes by MOKKE, who stunned us all with his last year's debut HAPPY CHAMELEON.